El Clàsico, an attempt at confirmation 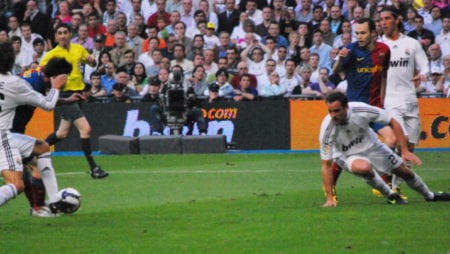 Real Madrid-Barcelona has always been one of the most anticipated confrontations in the world of football. Millions of fans all over the world follow every year the confrontation of two iconic Spanish football clubs that are composed of many of the world football stars and that during the last decade have been indisputably the dominant forces of European football.

However this start of the season sees these teams in a turbulent situation. New acquisitions that have not yet been adjusted, doubts about the respective coaches and injuries are some of the reasons that can be mentioned for this somewhat slow start of the season.

On one side is Real Madrid i Zinedine Zidane, who returned to the team at the end of last season and in these first months has experienced a period full of controversy and doubts about his ability to rebuild and re-motivate a team that last season seemed to have lost " hunger ”for success.

Valverde on the other hand has managed to win La Liga for the second season in a row, however the reversals of the result by Roma and Liverpool in the last two editions of the Champions League have left a bitter taste to the fans.

Despite the poor form in the preparatory phase and the points left in the first three games of the league, Real Madrid leads La Liga with 18 points (5 wins, 3 draws) and is 3 points ahead of Barcelona rivals. The latter seem to have felt the absence of several matches of Messi and during these first 8 matches have managed to collect 15 points (5 wins, 1 draw, 2 losses).

However the situation changes in the European arena where Barcelona has achieved 1 win and 1 draw against two tough rivals like Inter and Dortmund, while Madrid still managed to get a win after the first two games.

Both teams also have a La Liga match ahead of El Clàsico, but currently the ranking is as follows:

In this analysis we will try to single out the main tactical points that can have an effect on the team play and consequently on the final result.

This start of the season does not seem to have brought much change to Zidane's ideology as he has continued to place his team in the 4-3-3 lineup that goes to 4-4-2 or 4-3-1-2 throughout the course of the game . Frequent absences due to injuries have forced him to activate different players in the starting lineup however the general idea seems to remain the reliance on the axis of players with whom he has succeeded in the past and as a result new acquisitions have had few opportunities . The exception is Hazard, who since returning from injury has been activated as a starter in almost every match but without being able to show the same quality we are used to seeing from him. However in last week’s clash against Granada he managed to score the first goal and assist for the first time this season.

Despite the fact that the team game was generally unconvincing, the most critical point of the team was the defensive phase. Real Madrid continues to play with a high defensive line almost to the big of the field to create a team that plays on the block and tries to quickly break the opponent's counterattacks. However problems in positioning as well as the lack of quick reaction in the defensive transition have brought many goals conceded and after the 3-0 loss to PSG, Zidane was forced to make changes. In the matches against Sevilla and At.Madrid, the defenders of the wing took less part in the offensive actions and remained more positional without risking. Also wing players like Bale and Hazard were much more involved in the defensive phase and almost always followed the overlaps of the opposing wing defenders. This probably limited the attacking potential somewhat however it turned out to be a fruitful solution in terms of results as Madrid managed to get 4 points against two tough opponents.

The most positive element of this season start for Real Madrid is undoubtedly Benzema's form. The Frenchman has managed to score 6 goals in 7 appearances in La Liga, thus continuing the good form of last season.

The start of the season has been negative for Barcelona where in the first 8 games they have lost 2 and drawn 1. The main reason that has been mentioned often in the media in recent weeks has been the absence of Messi and Suarez. Undoubtedly that is a fair argument, but not the only problem of this Barcelona. The same problems of previous seasons continue in defense. Barcelona apply an early pressure on the opponent to regain control of the ball as soon as possible and resume circulation, but on days when the team fails to apply this tactic effectively defenders are often put in difficulty during counterattacks where even a veteran of defense like Pique seen in awkward position. Another problem is the lack of defensive options where in the absence of Umtiti, Pique and Lenglet are the only experienced players. The same goes for the left wing where Jordi Alba usually plays.

In the attacking phase the absences have been numerous and Griezman and Fati have not been enough to get positive results in some of the matches. Griezman is experiencing a phase similar to Hazard, where he is still adapting to the new environment and has not yet shown the same form as at Father Madrid, but it is worth mentioning that he has managed to score 3 goals in 7 appearances that do not is a negative statistic.

The Barcelona midfield has shown quite a positive form so far with De Jong seeming to have adapted quickly to the new club. With the return of Suarez and Messi, things are expected to become simpler for the midfielders as they will have reference points for the combination game they are asked to do and this will be a key point in El Clasico as well.

The battle for midfield

The most important clash of the match is expected to be that of midfield as this department in both teams will try to control the game by holding the ball and supply the attacking stars with scoring opportunities. Casemiro-Kroos-Modric's form will be key for Madrid in the defensive phase to stop Arthur, De Jong as well as Messi's discounts. Busquets on the other hand has not been in his best form and will have a hard time especially in the case of the incorporation in the game of James who comes from quite good matches.

The expectation is that Barcelona will be the team that controls ball possession and Real Madrid will continue with the pragmatic way of playing both against Sevilla and At.Madrid where the whole team engaged in the defensive phase and the attacking actions were characterized by counterattacks or individual actions where Bale and Hazard tried to put Benzema in the scoring position. And at this point it will be essential for Madrid that the midfield make the quick transition from winning the ball to passing it to the attacking trio in order to take advantage of the spaces that Barcelona often leaves in defense.

At Barcelona, ​​the only discussions have come from injuries, otherwise Valverde is clear about his lineup. The injury argument also applies to Zidane, however another choice the Frenchman has to make is that of left-back between Marcelo and Mendy. One offers attack support and good scoring opportunities while the other has shown so far that he is much more accurate and positional in the defensive phase.

Usually El Clasico puts in front of two teams that are absolutely contenders and in good shape. Over the last decade the decisions to be made have been few and the formations easily predictable. This season the situation is different. The coaches have important choices to make, Hazard and Griezman still scanning to show their potential and fan expectations are high in this match where Ronaldo and Messi have given fantastic performances for years.

However the biggest difference lies in the foma of the two teams. The slow start of the season, doubts about the coaches and their choices and the strange loss of dominant status in Europe make this match an attempt by the teams to be confirmed as contenders and to show their ambitions for this season.